In September, frontline activists are coming together for a “people’s Congress” in Washington, D.C., organized around an openly radical platform that aims to put a left political horizon in front of the resistance movements that have grown against Trump. Jodi Dean and Brian Becker are part of the group convening the Congress and they spoke with me about why it’s important to build an independent political movement that doesn’t revolve solely around Trump or focus on electoral outcomes for Democrats.

JD: If we think about a society for the many in the United States, what does that have to look like? It has to look like the society that people would want to produce. And if we’re going to produce one that is desirable, a good place to live, then we have to confront directly and honestly the dual legacy of the US founding, which was in slavery and genocide. The most direct ways that we have of confronting head-on the fact that the country was anchored in slavery and genocide is by taking up the two answers that have been put forward as just the starting point of confronting it, namely Native American sovereignty and reparations. That’s the way that you can even start the conversation of how do we build a society for the many. Confront the basic crimes that have been at the basis of the entire country.
BB: The people who say that reparations for black America, for instance, will alienate people, they’re not talking about black people. They’re talking about a certain segment of society. It demonstrates who we’re aiming for. In other words, to build a really powerful viable social movement, yes we want people from all classes and all sectors to be it, but the things that really make history change are when the masses of people, meaning the poorest, the most oppressed, those sectors of society come onto the political stage. That’s why the sort of semi-revolution, the civil rights revolution happened, when Rosa Parks refused to give that seat up to a white man, the next nine years the masses of people came into politics. And so the Congress of the United States, which was compositionally the same as it was when Rosa Parks refused to give up her seat in 1955, nine years later voted for the Civil Rights Act and the Voting Rights Act, the two most progressive pieces of social legislation, it was because the poor, the masses, the working classes, the black community in particular came into political life. That’s what makes change possible, and that’s who we’re orienting toward with the People’s Congress.

Up at Truthout.
Up at The Progressive.
Interviews for Resistance is a syndicated series of interviews with organizers, agitators and troublemakers, available twice weekly as text and podcast. You can now subscribe on iTunes! Previous interviews here.

END_OF_DOCUMENT_TOKEN_TO_BE_REPLACED 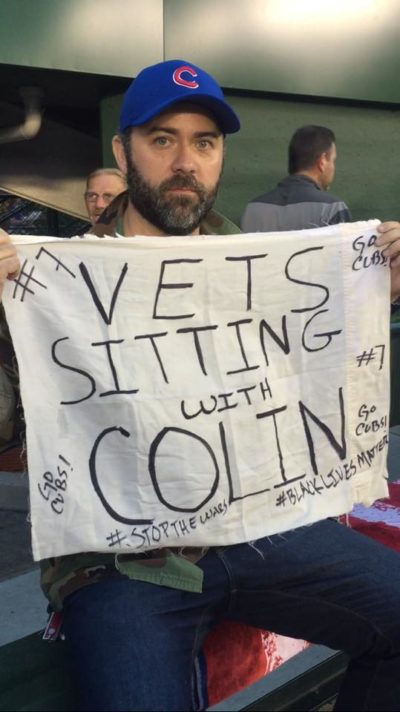 Donald Trump’s budget slashes social programs while inflating an already-massive military budget, meaning that for many people in already-underserved and underemployed communities, the military will be the closest thing to a welfare state they have. Rory Fanning is a veteran and conscientious objector, author of the book Worth Fighting For: An Army Ranger’s Journey Out of the Military and Across America, and his work centers on opposing U.S. militarism at home. He is also the co-author, with Craig Hodges, of the new book Long Shot: The Triumphs and Struggles of an NBA Freedom Fighter. We spoke about opposing Trump’s military buildup, the roles that veterans and athletes can play in movements for change, and the long tradition of imperialism in the U.S.

Recognize that people do the best with the information they have access to and most people think that the U.S. is fighting for freedom and democracy around the world and they sign up with very good intentions. I think a lot of people are disillusioned by what they actually see when they are overseas. One of the things I say when I actually do have a chance to talk to high school students here in Chicago, because it is very difficult, is just, “Thank you for allowing me to do it.” There is very little space for veterans to come back and tell their stories. There is a lot of patting on the back at sporting events and concerts and whatnot, but as far as actual space to hear the realities of war, there are next to none. Unless you have a very positive take on the last fifteen years, people don’t ask you to talk.